You are here: Home / Snacks 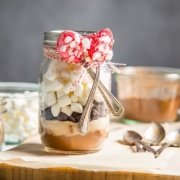 Typically I fall into the DI-Don’t category. My DIY attempts are good for a laugh and that’s about it. Unless it involves food—then watch out. I’m a DIY boss. So even if you don’t consider yourself a DIY’er I encourage you to give this easy gift project a shot. If you’re a seasoned DIY’er then feel free to jazz this up as only a DIY master like yourself knows how.

Love peppermint spoons more than anything? Pick up a silicon spoon shaped candy mold. Crush candies as you’ll be directed, add to molds, and heat until melted.

This recipe can be halved (use an 8oz. Mason jar) or quartered, for single-serve mini jars (use 1a 4oz. Mason jar).

It’s hard to believe that Vega co-founder Brendan Brazier’s international bestseller The Thrive Diet was released 10 years ago. Luckily for us, he’s released a new edition: The Thrive Diet, 10th Anniversary Edition: The Plant-Based Whole Foods Way to Staying Healthy for Life. In celebration, we’re sharing one of our favorite recipes from this edition.

Cinnamon and nutmeg combined with banana give this bar the taste of traditional banana bread, in a nutrient dense, convenient form.

Recipe appears in: The Thrive Diet, 10th Anniversary Edition: The Plant-Based Whole Foods Way to Staying Healthy for Life By Brendan Brazier by Penguin Canada (in Canada) and Hachette Book Group (in the United States).

In a food processor, process all ingredients until desired texture is reached.

Remove mixture from the food processor and put on a clean surface. There are two ways to shape the bars: You can roll the mixture into several balls, or shape it into bars.

To shape into balls, use a tablespoon or your hands to scoop the mixture. Roll mixture between the palms of your hands to form a ball.

To shape as bars, flatten  the mixture  on a clean surface with  your hands. Place plastic wrap over top; with a rolling pin, roll mixture to desired bar thickness. Cut mixture into bars.

Store in fridge or freezer until ready  to enjoy.