Blog - Latest News
You are here: Home / Nutrition and Health Tips / FRUCTOSE IN YOUR DIET: ALLY OR ENEMY?

Fructose is a sugar, a simple monosaccharide naturally found in honey, fruits, and – in fewer extent – vegetables, often together with other sugars like glucose and sucrose. Also, it’s used as a sweetener in many commercial snacks, and your common table sugar itself (being the sucrose a disaccharide) is half consisting of fructose. During the digestion, the sucrose molecule splits into its components fructose and glucose.

Therefore it’s not so uncommon to eat a large amount of this sugar if you have too many sweet foods in your diet. After all, the proverb says an apple a day keeps the doctor away…not an apple pie!

The main feature of the fructose is its sweetness/energy ratio which is higher than sucrose. This means fewer calories in order to obtain the same result as a sweetener. Actually, it’s possible for someone to feel some slight differences in taste and texture, but not as much as other artificial sweeteners.

Fructose has some interesting properties:

Mainly for these reasons, this sugar began to gain a good popularity after the 90’s, as we started to see fructose packs in supermarkets in several countries. But are these features so relevant to really make difference in substituting sucrose in your diet? Could you really eat all the fruits you want? It depends, so let’s take a deeper look. 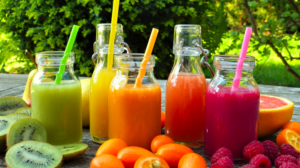 Fructose is absorbed directly by the intestine with a maximum capacity ranging from 5g to 50g per individual serving, depending on the further presence of sucrose and the overall dietary fructose intake. This means the first reason you should avoid eating too much fruit or honey at the same meal, is that you will probably end with gastrointestinal pain.

Once in the blood flow, fructose has mainly two options: being taken by the skeletal muscles or by the liver. The first pathway is difficult since the muscle cells lack the specific enzymes, carriers, and receptors for this sugar so it is the liver who handle almost all your fructose intake. Through several biochemical pathways, fructose is then transformed into glycogen which is stored in the liver at maximum capacity of 80-100g. When the liver reserve is full, the excess fructose will be mostly directed towards the synthesis of triglycerides, which can be taken mostly by our fat cells (adipocytes) with all the related problems. It actually can be even worse, as an amount of these triglycerides can accumulate in the liver leading to a disease called non-alcoholic fatty liver disease.

Thanks to its feature to avoid the muscle cells, fructose has a very low glycemic index as the ingestion does not appreciably increase blood sugar level. This seems to be really interesting especially for diabetics and all those who need to control their insulin spikes, but all that glitters is not gold. The lack of insulin stimulation doesn’t lead to a ghrelin decrease (hunger hormone) thus not contributing to your satiety. Even leptin hormone isn’t stimulated as other carbohydrates do, therefore not helping us to increase metabolism. Not a good deal if you are following a weight loss diet!

The bottom line is that unless you are diabetic and want to avoid artificial sweeteners, you probably don’t need to replace sucrose with fructose. 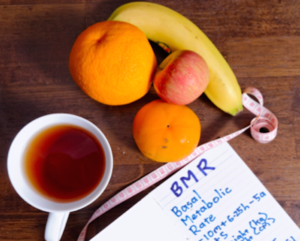 As regard fruits and honey, if you aren’t a sedentary person it’s hard to eat too much fructose through these sources, especially if you avoid sweet junk foods. To have an even better use of this sugar, you should avoid it when your liver is already full of glycogen, which means just after the main meals. A good timing could be the first breakfast, or as post-workout. In this case, your muscles and liver are glycogen depleted, so well ready to be refilled with sugars. Moreover, researches show that a little amount of fructose as post-workout helps the liver to a faster recharge of glycogen, which is important for your comfort after a hard training. 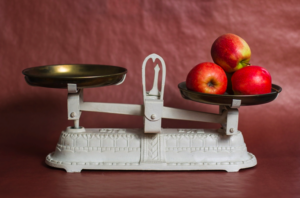 In conclusion, even if the fruits of the last decades are getting richer in sugars due to artificial selections, it’s not the eating of 2-3 fruits per day which makes you fat, especially observing the simple tips described before. The advantage brought by a regular fruits intake (thanks to minerals and vitamins) are surely greater than disadvantages of getting some extra calories from this sugar.

WHAT YOU NEED TO KNOW ABOUT EDIBLE OILS IN YOUR DIET HOW MANY EGGS SHOULD I EAT?
Scroll to top